San Giovanni D’Asso Treasure: by the discovery of the treasure of the Goths to the Holy Valley

The municipality of San Giovanni d’Asso can be defined as the natural border between the Valdichiana and the Maremma areas. Located in the southern part of the province of Siena, about 15 minutes from Montalcino, it is characterized by urban settlements and architectural works of art, which perfectly blend into the natural surrounding environment of prominent farm homes and Romanesque churches surrounded by uninterrupted rows of Brunello and Rosso di Montalcino vineyards.

We are talking about a territory that has been inhabited for time immemorial. Recent archaeological digs have brought to light the ruins of Etruscan-Roman settlements. The first reported settlements within the municipality date back to the V-VI centuries when an important parish church was erected, Pieve di San Pietro a Pava. As shown by a certain continuity in settlements from the Roman period until the early Middle Ages, the Pieve was most likely built near an ancient empirical Roman villa. This complex, with an imposing structure for its territorial setting (32 metres long and 10 metres wide) that sits east to west, is undoubtedly linked to the passage of an important route that meets the Asso Creek at this point.

“Il Pievere di Pava and the Church of San Marcellino”, or the territory relating to the baptismal early Christian parish church San Pietro in Pava in Val D’Asso, is circumscribable, thanks to the presence of some documents related to a six-hundred year long dispute between the Bishop of Arezzo Luperziano and the Bishop of Siena Adeodato in order to obtain control over the territory.

The documents date back to 714 A.D. and originate from Liutprand’s “Testimoniale Maggiordomo e Messo”, who was called in to settle the dispute. 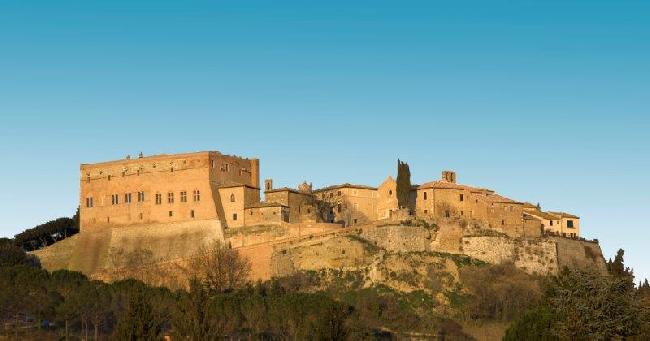 As proof of the existence of and the importance of this parish church, there are the settlements of the VII-VII centuries on the hills where the medieval castles of San Giovanni d’Asso, Lucignano d’Asso, Menterongriffoli and Vergelli would stand: all part of the “Piviere di Pava”.The dig of the main building and opposing apses, started by the University of Siena (source: LAPeT Universitå di Siena and Partners) in 2004, recovered a small treasure hidden in a recess in the apse on the west side of the church composed of six gold and twenty silver coins from the Gothic age.

First reports of the historical San Giovanni d’Asso Castle, which dominates the town of the same name, date back to 1151 when it was ceded by feudal lord Paltonieri di Forteguerra to the City of Siena. A few decades later (1178), the ownership passed into the hands of Ugolino Scolari. In the mid 1200s, an old Sienese family, Buonsignori, acquired jurisdiction of the castle while at the beginning of the 1300s it passed into the Petroni noble family through the figure of Cardinal Riccardo Petroni who completed an extension and built the Church of Saint John the Baptist behind it and bestowed a series of relics to it including relics from Saint Catherine of Siena, Saint Peter the Apostle and Saint John the Evangelist. 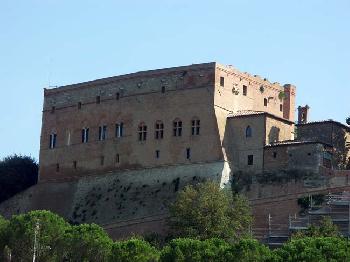 Until the end of the 1990s, the ownership of the building passed through various hands until the city of San Giovanni d’Asso took over and started restoring it. The Castle is an architectural complex made up of three buildings around a central courtyard. Built in limestone and brick, it looks more like a noble building rather than a real castle more than ever as the original battlement has almost entirely disappeared. The western facade is adorned with a series of single and double mullioned windows in Gothic and Romanesque style, some of which still feature small marble columns. The internal courtyard features a high arcade with octagonal columns with an open gallery above it. Inside, the great room “Sala del Caminetto” 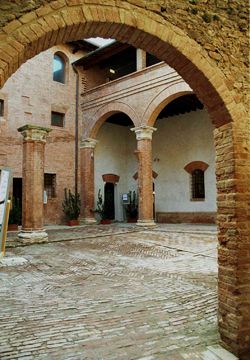 with its large ogival windows is of a more recent construction, and it is thought to originate at the time of the extension and restructuring by the Petroni family.

Noteworthy artistic and architectural features inside the room include the great travertine fireplace and the pietra serena sink. Paintings and frescos dating to the XVI and XVII centuries decorate the walls and ceilings of the room and seem to have been painted by a painter in the Ventura Salimbeni circle, Mannerist painter of the Renaissance Sienese School.

Today the castle is the home of the City Hall and also of the Truffle Museum and Documentation Centre, the first museum in Italy dedicated to the most famous symbiont fungus in the world. A very important and well-organized exhibition center divided into four sections where visitors may discover all the secrets of the local typical product. There are sensory experiences, and there is the chance to learn which trees are linked to the truffle and why, as well as the chance to hear the legend about the origin of the truffle. Finally there is an area dedicated to the truffle harvest, production and conservation.

And, as every year for the last 28 years, on the weekend of November, there will be the Mostra Mercato del Tartufo Bianco delle Crete Senesi, the White Truffle Fair and Market. San Giovanni d’Asso gets ready to celebrate the ‘White diamond” by offering two weekends of tastings, markets and seminars for the most prized hypogeal fungus. In addition to the food and wine experience, there will also be demos, shows and seminars.