Henry Vll (Valenciennes 1275 Buonconvento, August 24, 1313) was the son of Count Henry VI of Luxembourg and Beatrice of Avesnes. He was raised in the French court and was connected to it because of cultural and political bonds. In 1292, he married Margaret of Brabant with whom he had three children. He was elected King of Germany in 1308, in spite of opposition by the King of France, Phillip the Fair, who hoped to crown his own brother Charles of Valois. Henry Vll, commonly known as Arrigo 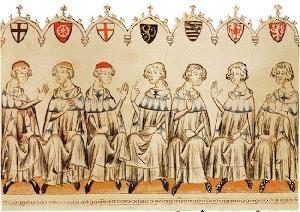 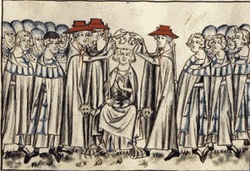 was crowned on January 6, 1309 in Aachen with the help of his brother Baldwin, Archbishop of Trier, who had won over a number of German votes, despite the fact that approval had not yet arrived from French Pope Clement V in Avignon.

The Emperor had his son John marry Elizabeth of Bohemia, sister of Wenceslas Ill. This union led to peace with the Hapsburgs and brought with it the Empires of Bosnia and Moravia. Inspired by principles of peace and justice, Henry Vll set out to realize his goals both in Germany and Italy, where he headed to in October 1310 with his army and in the company his wife and brother to assert his imperial rights, while his son John remained in Prague as Imperial Vicar. 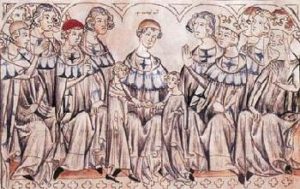 Dozens of wars and battles resulted in the formation of dozens of independent citystates in Italy, Guelph or Ghibelline, either supported by urban nobility backed by a powerful sovereign  (like Milan) or by the emerging mercantile classes incorporated in a republican state (like Florence). 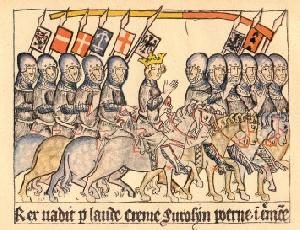 He decided not to show any initial favouritism, but insisted on the fact that the governors of the Italian city-states give up their power and revert back to the immediate control of the Emperor and that the exiles should be recalled. King Henry Vll arrived in Torino in November 1310 at the head of 5,000 soldiers including 500 cavalrymen.

After a brief stay in Asti where he intervened in the political affairs of the city, with great consternation by Italian Guelphs, Henry headed to Milan where he was crowned King of Italy  with the Iron Crown of Lombardy on January 6, 1311 in the Church of Sant’Ambrogio.

At first, he wanted to the restore the glory of the Holy Roman Empire and took on the role of pacifier between the Guelphs and Ghibellines, arousing great hopes among his supports, including Dante Alighieri, who affirmed that the authority of the Emperor came directly from God during his “Monarchy” and that, therefore, the emperor was independent from the papacy. In the conflict between the Guelphs and Ghibellines, he ended up siding with the latter, causing worry in Rome and openly putting himself in opposition to the King of Naples, Roberto of Anjou, head of the Guelphs, who supported the Papacy and Florence, their stronghold. 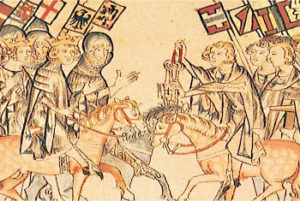 The Emperor spent some months in Genoa where his wife, Margaret of Brabant, died on December 14, 1311, and where the famous sculptor Giovanni Pisano created her tomb, commissioned by the emperor. Called “Elatio animae” (Genoa, SantAgostino Museum),

this tomb feature shows Margaret being lifted at the arms by Wvo angels who help her ascend into Heaven. The work, created in Italian marble, is not complete, but the look of the Empress, “enlightened by a celestial hope” towards the Divine, represents an important precedent of mystical ecstasy in successive figures such as Saint Teresa d’Avila by Bernini (Rome, Santa Maria della Vittoria Church). A statue symbolizing the “lustitia Imperialis” was also part of the tomb, which, according to Dante Alighieri, embodied Henry Vll.

The King continued his descent in Italy by boat towards Pisa where the Ghibelline inhabitants, traditional enemies of Florence, received him with enthusiasm. He then left Pisa for Rome where he was to be crowed emperor, but, along the way, he found out that Clement V had no intention of crowning him there. Henry drew closer to the Roman walls while the city was in a state of confusion: the Orsini family had taken up the King of Naples’ cause, while the Colonna family sided with the royals.

On May 7, the German troops were making their way across Milvian Bridge and entered Rome, but it was impossible to stop the Angevin troops from the Vatican stronghold. The Colonna family controlled the area around the Basilica of Saint John the Lateran, Santa Maria Maggiore and the Coliseum, so Henry was forced to hold his coronation at the Lateran on June 29, 1312 coerced the cardinals in charge to ensure Pope Clement V’s protection in Avignon.

In the meantime, the King of Naples, Robert of Anjou, continued pressuring the Emperor who, instead of coming to a truce, threatened to attack the Kingdom of Naples with King of Sicily, Frederick of Aragon. The chaos in the city of Rome forced Henry Vll to leave, and

by counsel of the Ghibellines, he fled to Arezzo. In midSeptember 1312, before having to clash with the King of Naples, he had to face the Florentine Guelphs in an open battle. This was the start of the siege on Florence at San Salvi sending about 15,000 foot soldiers and 2,000 cavalrymen against the 64,000 who defended Florence in addition to Guelph soldiers from Lucca, Siena and Bologna. The battle lasted six weeks, but, in the end, 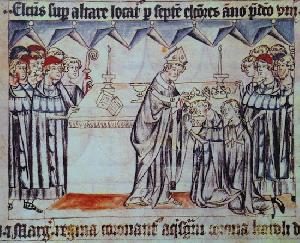 Emperor Henry Vll was forced to abandon the siege and return to Pisa. Villani observed that in such a situation the city of Florence “cockily” left the gates to the city open as if it were not under siege or at war to regularly continue its trade.

After reinforcements arrived from Germany and after support from the city of Pisa, the Emperor started his campaign against King Robert of Naples, vassal of the Church. Henry Vll left Pisa amidst the joy of all Ghibellines on August 8, 1313 for what was supposed to have been a mighty front against the King of Naples, with the Emperor himself at the head of the army. 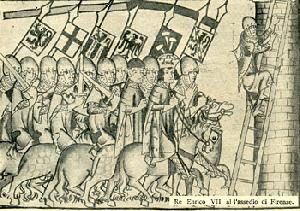 The first objective was the city of Siena, which they surrounded, but, within a week, he was struck with malaria. He first sought relief in Bagni di Macereto (near the Petriolo Hot Springs) and at Saint Catherine’s Hot Springs (in Bagno Vignoni), then moved to Buonconvento where he died on August 24, 1313 in the Church of Saints Peter and Paul. 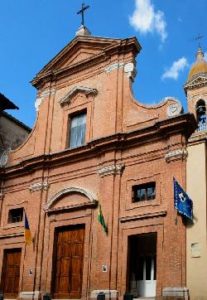 His death was so unexpected that the news spread that the King had been poisoned by a host given him by his confessor, friar Bernardino from Montepulciano. This legend should be discredited after a recent study of the Emperor’s remains in addition to the authentic statement made by Henry Vll’s son, John of Bohemia, who denied such allegations. 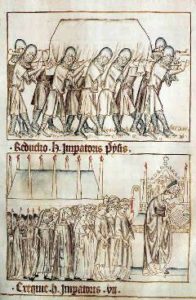 After his death, his internal organs were removed and the body was taken to Paganico and then to Suvereto where it was prepared for the official burial that would take place in Pisa.

Henry Vll had not yet reached forty years of age when he died, and his hopes for actual imperial power in Italy, as even Dante Alighieri hoped for, died with him.

It was built in 1315 by Tino di Camaino and featured a sarcophagus with a statue of Henry Vll resting on top and many other statues and details. It was taken apart and damaged many times, and some parts were used elsewhere in the square outside the cathedral. 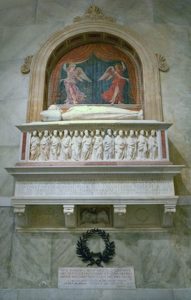 In the 20s of the Wventieth century, the sarcophagus had been moved to the right transept of the Cathedral, near the tomb of Saint Rainerius, patron saint of the city. Other statues  were located on the upper part of the faqade, while others representing Henry Vll himself were in the cemetery. 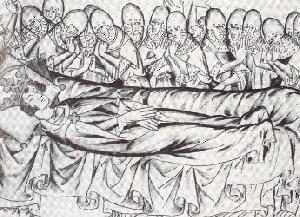 Today the statues are in the Cathedral Museum, Museo dell’Opera del  Duomo, which opened in 1986, while the tomb is still located inside the Cathedral 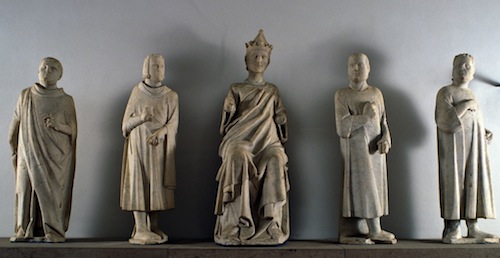 The last opening of Henry Vll’s sarcophagus dates back to 1921 on the occasion of the 600th anniversary of Dante Alighieri’s death, and it was at that time that it was relocated to the right transept of the Cathedral of Pisa. Yet we had to wait until October 2014 to understand the value of the grave goods, which have lain with Henry for over seven centuries.

The opening of the sarcophagus involved many including the Archbishopric, the Museum, the Superintendent, and the University of Pisa. 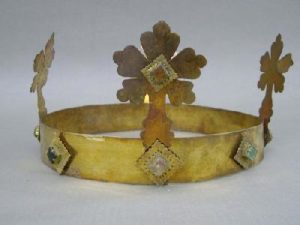 Once the seals were broken, the remains of the Emperor were seen wrapped in a cloth topped by a crown, sceptre and globe. The three objects recall the images of the Emperor, contained in the 73 illuminated manuscripts of his descent to Italy, commissioned after 1330 by brother Baldwin and preserved today in Coblenz in the Landenshauptarchiv State Archive where brother Baldwin, Archbishop of Trier, can be easily recognized first donning a red then green skullcap.

In addition to the symbols of power – crown, sceptre and globe in gold-plated silver — a 3mx120cm long rectangular cloth was found, a rare testimony of the unique production of silk at the beginning of the XIV 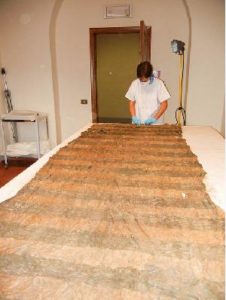 century. It seems to be a real medieval treasure for its physical condition as well as size and is considered to be the most important medieval fabric ever found. A “benchmark” to which all fine silk cloths will be compared in the future. It was made with strips of silk of about 10cm alternated with pinkish-brown, red, and blue bands: rich colours rich in symbolism. The blue bands seem to be worked in gold and silver with pairs of lions facing each other, symbols of sovereignty, while a complex monochrome design, tone on tone, is present on the pinkish strips. At the beginning of the piece of fabric, on a purplish-red strip bordered with yellow, appear traces of an inscription which is yet to be deciphered.

A special feature, making the piece unique, is the presence along the length of the fabric of selvages while on the short sides there are two small chequered bands: this defines the size of the cloth and may give important clues to its use. The interpretation and importance of such a find lies not so much in the meaning of each decorative feature as much as in the value and in the quality of the silk which indicate power, sacredness, and preciousness, which were universally recognized in the Middle Ages. Such iconographic value can travel long distances yet maintain its formal meaning.

Other important information has been taken from the study of the Emperor’s remains by the Anthropology Department at the University of Pisa. For now, they have estimated Henry VIPs height at 1.78m, quite above average for that time, and age to be about 40 at the time of his death.

Given the importance of the objects and considering the historical context, it was decided to destine the objects to the Museo dell’Opera del Duomo, the Cathedral Museum, in Pisa. 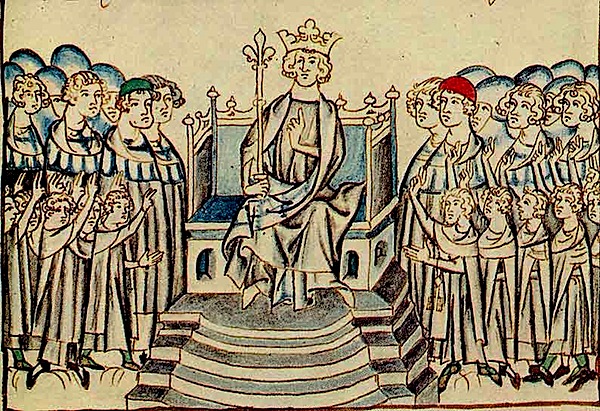 The manuscript describes the Italian country by Emperor Henry Vll in the years 1310 to 1313, and whose objective was to be crowned by the Pope and proceed with a deep restoration of the empire (restauratio imperil).

The manuscript was probably written around 1340, as authorized by Henry’s brother Baldwin of Luxembourg, Archbishop of Trier. It consists of 37 parchment scrolls with big illustrations as well as short notes in Latin and describes the key moments in Henry’s reign, but mostly his time in Italy. It also contains the first known representation of the Electoral College. It is an important document about the history of an empire in late Middle Ages in addition to being a fascinating and unique representation of Henry Vll’s descent to Italy.

FROM APRIL TO SEPTEMBER

Entrance to the monuments and museums is permitted up to 30 minutes before closing time. On holidays, the Cathedral is open to visitors at 1 p.m.