The town of Pienza was founded by Enea Silvio Piccolomini, born on 18 October 1405 to a noble Sienese Family, which had over the years fallen on hard times, and for political reasons fled Siena to seek refuge in the city of Corsignano, in Val D’Orcia.

Enea was born in this small village where there was a small Romanesque Church and a Praetorian Place. Once Enea reached adulthood he moved to the city of Siena where he began his law studies, thanks to which he found his first job as a lawyer for Cardinal Capranica, who brought him to Basel. It was in this new role that his Repulican personality came to light, and from there he began a diplomatic career that took him around Europe, coming into contact with very different cultures and civilizations.

At the age of forty he made an important life choice, taking up religious studies, and after only a few years he became a priest, bishop and cardinal. In 1458, after the death of Pope Callistus Ill and a much discussed conclave, he was proclaimed Pope Pius ll. The Piccolomini family regained their power. A tangible sign of this new beginning was the transformation, deeply desired by Enea, of his native village of Corsignano. This choice was certainly driven by personal motivations, but above all by the desire to leave a concrete sign of his dynamic cultural and political growth.

In transforming the town Corsignano into the town of Pienza he incorporated his dream of transforming the world based on a new more modern theme, both tolerant and cosmopolitan. Enea Silvio Piccolomini fully embodied the spirit of the Italian Renaissance, represented by men searching for utopia projects while still remembering the greatness of the past, rejecting pessimism, demonstrating courage while using experience to overcome and redeem man from evil.

Not surprisingly, the design of the new town was entrusted to Bernardo Gambarelli, known as “Rossellino,” an architect at the school of Leon Battista Alberti, and a member of the Florentine humanist community. He also belonged to the academy of Neoplatonists who sought the way and the symbols that could lead them to the “ultimate truth” through science and the study of astrology, mathematics, and numerical symbols to discover the laws of nature and understand man’s place in the cosmos. Rossellino, an eminent architect, with the help of Leon Battista Alberti, a master, was able to translate the dreams and myths of the humanists to architectural structures.

The work began in 1459 and ended in 1462 with the decision of Pope Pius Il to proclaim the rebirth of Corsignano as Pienza. The papal entourage was forced to take up residence in Pienza, or risk losing their titles.

The myth of the “ideal city” is a regular feature of the humanism culture, which refers back to the “hermetic” text of Hermes Trismegistus (an Egyptian priest, a mythical figure, depicted in the Duomo of Siena), which told of the construction of Al Asmunain, as the ideal city, or perfect city according to precise astrological and mathematical laws.

A stroll through Pienza

To enter the town of Pienza you go through a sandstone gate, adorned with a fresco depicting the Piazza Pio ll. Small streets will lead you to the first medieval village, well preserved from the renovation during the Renaissance, and then on to the castle walls that with their panoramic position offer a glimpse of the entire Val D’Orcia. Following the ancient walls leads up to the first European roof garden, Palazzo Piccolomini, cultivated in Italian style. The palace, which was the seat of the Papel Court and now a museum, was also built of sandstone with some travertine inserts, used for windows, frames and outdoor seating.

The building follows the example of Palazzo Rucellai in Via della Vigna, 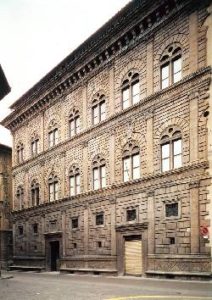 which Alberti had previously built in Florence. A piece both elegant and essential to this palace is undoubtedly the “Well of the dogs,” an architectural gem designed by the same Rossellino, which brings balance to the Piazza Pio ll. Another symbolically important element is the inner courtyard of the building, accessible from the roof garden, which, thanks to its orientation to the east, a “solar” hymn to the creation and enjoyment of its beauty, a core philosophy of the Renaissance. 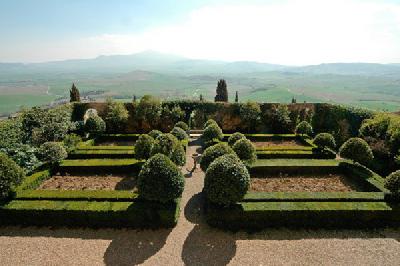 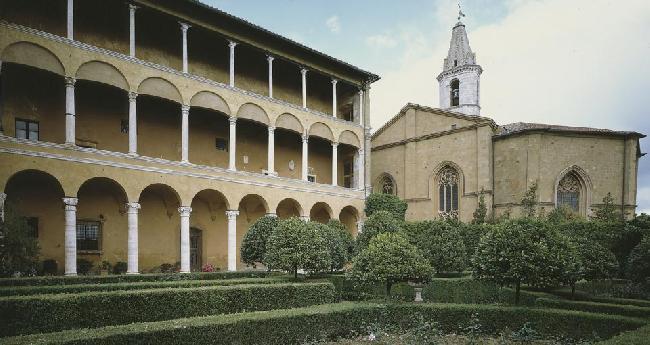 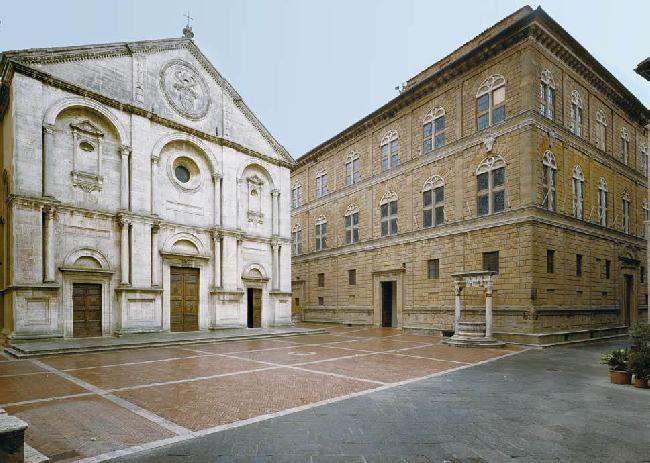 The square where Palazzo Piccolomini is located is one of the most famous squares in the world. It was the result of an architectural design and philosophical concept embracing the space, the light, the color and perspective, while giving the land a new value. Those same values inspired Enea Piccolomini in the transformation of the entire village. The architectural structures were refined, taking into consideration the panoramic views, the gatherings taking place in the center of the square, while revealing a modern plan, which was cosmopolitan, optimistic, peaceful and hedonistic.

The characteristics of the square includes its trapezoidal shape, which gives a unique perspective to the buildings that surround it and the position of the cathedral, which presents no obstacle to the view of the sky, giving it its place in the Universe. The uniqueness of the project lies in having dislocated the divergent buildings flanking the Duomo.

Based on this positioning, two results were achieved: the first a perfect natural lighting of the interior of the cathedral, the second the symbolic representation of the Renaissance man fascinated by the celestial world and therefore projecting it into the sky while keeping the structure firmly tied to the ground.

There are only two squares constructed in such a way in all of Italy: Piazza Pio Il in Pienza and Piazza del Campidoglio in Rome by Michelangelo. The use of the trapezoidal plan expands the vision of the spectator decreasing the normal narrowing perspective. It is important to focus on the uniqueness of the trapezoid square as it represents a connection between heaven and earth.

Knowledge of this perspective also comes from studies done by Leonardo da Vinci on the use of glass in the perspective outlined in the Code of the Atlantic where the artist looked through it to represent an armillary sphere (model of the celestial sphere).

These same studies were applied by Giorgio De Chirico in his paintings of “Squares of Italy”. 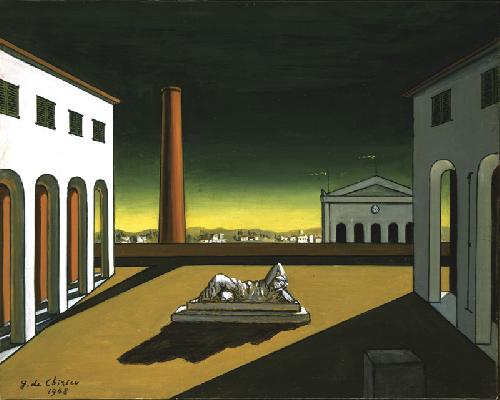 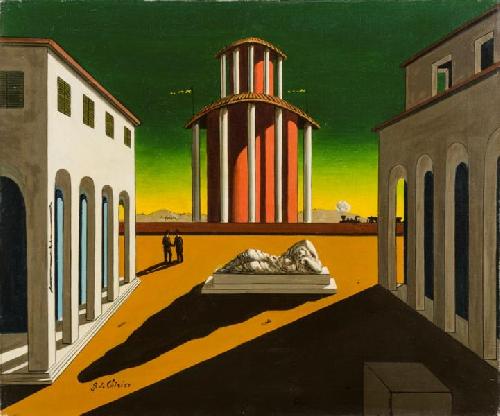 The fagade of the Duomo is Renaissance style, while the tower is in gothic style. Built with sandstone, travertine floors, it has four pilasters that divide the facade into three sections. Over the side doors are double column arches.

The Gothic style of the bell tower also found its way inside the cathedral, which was designed using the Latin cross floor plan. Two rows of travertine columns divide the church into three naves. Particularly interesting is the lowering of the columns moving towards the apse, caused by the subsidence of the ground upon which the foundations were built. This sinking process began shortly after the construction was finished, which had already been noted by Piccolomini.

Pius Il issued a Papal Bull which forbade the tampering with his work or any changes to the Square and Palaces of Pienza. Anyone doing so would be punished with the penalty of excommunication.