In Montalcino lies a church called the Church of Our Lady of Soccour (Chiesa della Madonna del Soccorso). It is an all-white church made of light-colored marble and overlooks one of the most beautiful valleys in the world. 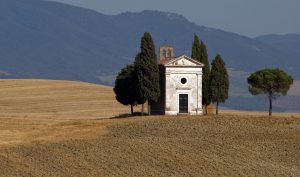 It is possible to stay there for hours admiring the view; in the garden near the church there are benches, generously made available to the citizens, which seem to have been put there to allow people to delight in the precious view offered by such a magnificent place. In this spot it is possible to see fields, castles and vineyards. From there, it seems that the world is at peace, a world lived by hardworking men and women who find passion in their work and live in harmony with the beauty of nature. 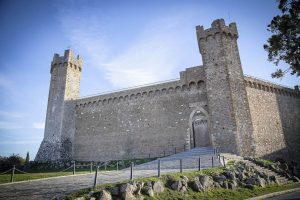 Inside the large church, one’s heart and gaze linger on the colored flags of the districts which, hanging on the walls, recall the days of victories and celebrations. Then, almost hidden at the top, on the main alter, is an ancient tablet depicting the Virgin and Child between Saints Peter and Paul, covered with a beautiful cloth and embroidered by the women of the village.

This sacred image is called Our Lady of Mutual Succour (Santissima Madonna del Soccorso) and the citizens of Montalcino celebrate it every May 8th by offering votive candles.

The story of this image is intertwined with the most significant events in the history of the Grand Duchy of Tuscany. 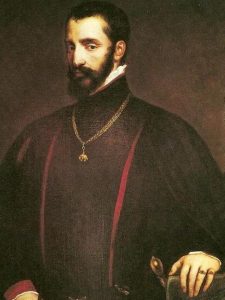 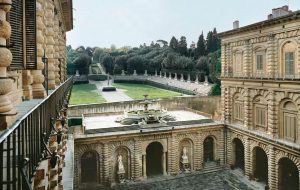 n 1553 German and Spanish militias led by Don Garcia of Toledo, brother in-law of  Grand Duke Cosimo I, attacked Montalcino, where the people, together with the Sienese and French armies, were preparing to fight off the enemy.

When the German, Spanish and Italian troops arrived in Montalcino, the local people, the Sienese army of exiles and the French troops were able to resist for a long time. The siege lasted 81 days and when it ended the besieging troops decided to withdraw, but not without attempting one last attack on the city.

But according to the legend, just at that moment the Virgin Mary appeared in front of the Captain General of the army corps – Prince Garcia Alvarez de Toledo y Osorio, former viceroy of Sicily and Catalonia- and his troops. This along with its celestial mantle protected Montalcino and its fortress.

Legend has it that this sighting caused Prince Garcia Alvarez de Toledo to kneel and subsequently was forced to abandon Montalcino with his troops. 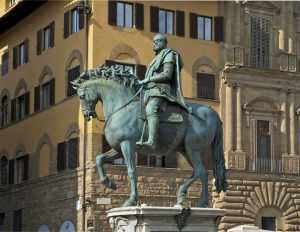 Don Garcia Alvarez De Toledo, a soldier of high rank and noble lineage, was the Grand Duke Cosimo I’s brother in-law. His sister was in fact the beloved Eleonora di Toledo, Duchess of Florence and the great love of Cosimo. Residing in Signoria Square (Palazzo della Signoria) they desired to change their residence to Pitti Palace (Palazzo Pitti). This led to building a wonderful and large garden which became known as the Boboli gardens in Oltrarno. The city of Florence acquired a more international role with the presence of the Duchess Eleonora. Even her famous portrait painted by Agnolo Bronzino was commissioned in such a way that, through the beauty and pomp of the Duchess’ dress the refinement, wealth and internationality of the Grand Duchy of Tuscany and Florence were emphasized.

In Montalcino, thereafter, a man of such rank as Prince Garcia Alvarez de Toledo, with a truly valid and important military career was left no choice but to surrender.

He was put to rest in Naples, where he was buried in the church of San Giacomo degli Spagnoli. 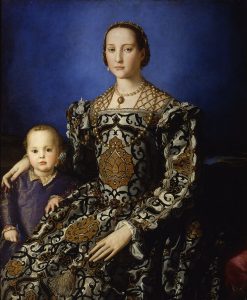 The Grand Duchess Eleonora, his sister, rests instead in the crypt of the Medici Chapels of the Church of San Lorenzo in Florence.  During the first reconnaissance of the bodies in 1857, it was discovered that the Grand Duchess had not been buried as believed, with the famous dress in the painting by Agnolo Bronzino, but in a much simpler dress.  The dress, worn on the verge of death is today restored and exhibited in a special display case that preserves it from damage at the Galleria Del Costume in Florence.

“It is a rich white satin dress that reaches the ground and is richly embroidered… and underneath there is a crimson velvet skirting. The silk stockings are of the same color.”

Montalcino celebrates the Madonna della Consolazione every year on May 8, which later took the name Madonna del Soccorso, precisely for those who offered help to the city as a vow and promise of eternal faith. 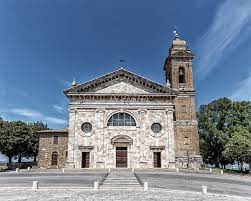 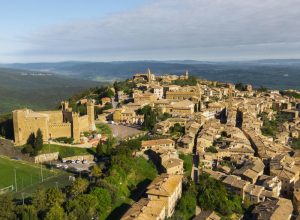