Sant’Antimo Abbey: A legend among the vineyards of Brunello

The second stop on our journey takes us to a real gem of Romanesque architecture located in the heart of the Montalcino territory. Evidently, the undisputed home of good wine, which is expressed here in Sant ‘Antimo DOC white wine and red, and the most famous and ancient Vin Santo Occhio Di Pernice, and which also contains many other secrets to reveal. Beatesca.com will tell you the story of the Sant’Antimo Abbey.

The Sant’Antimo Abbey is a monastic complex, a true testament to the period of Romanesque architecture, located in a corner of Tuscany that is extremely breathtaking, not far from the town of Castelnuovo dell’Abate in the Municipality of Montalcino. Solitary and majestic, the monastery is surrounded by four hills that make up the Valley of the Starcia Creek.

Legend has it that it was founded by Charlemagne (742-814), who, on his way back from Rome along the Via Francigena, left his seal on the foundation of the monastery and abbey as a gesture of gratitude for the graces received after his army was saved from the Plague, which was rampant at the time.

The first documented evidence dates back to the year 814 A.D. when the heir to the emperor, son Ludovico il Pio, bestowed goods and privileges upon the Abbey. Thanks to the Carolingian impulse, its period of maximum splendour began. Numerous pieces of faith land and farmhouses located throughout the Montalcino territory seem to have belonged to the Abbey.

Influenced by the French school and inspired by the Vignory Abbey, it peaked in the Xll century, the period in which the current architectural structure was erected, as proven by the year 1118 that is carved into the step on the main altar. The structure was built with local stone: travertine from the Castelnuovo dell’Abate quarry. The structural characteristics of this stone and the delicate veins of alabaster make the Abbey especially shiny from the reflections of light due to the changes in weather and light in the sky.

In the XVIII century, the monastery is lowered to a simple oratory. Only in the XX century, after having passed through the hands of the State, the Abbey of Sant’Antimo once again took on its spiritual grandeur.

At the end of the 1970s, the Bishop of Siena restored the monastic community of Sant’Antimo. They are the Canons Regular Premonstratensian, and lead a common life according to the model proposed by the Apostles and the Rule of St. Augustine.

Although small with only eight monks of French origin, the community is now very active: religious functions are celebrated every day in Latin with liturgical accompaniment in Gregorian chanting. 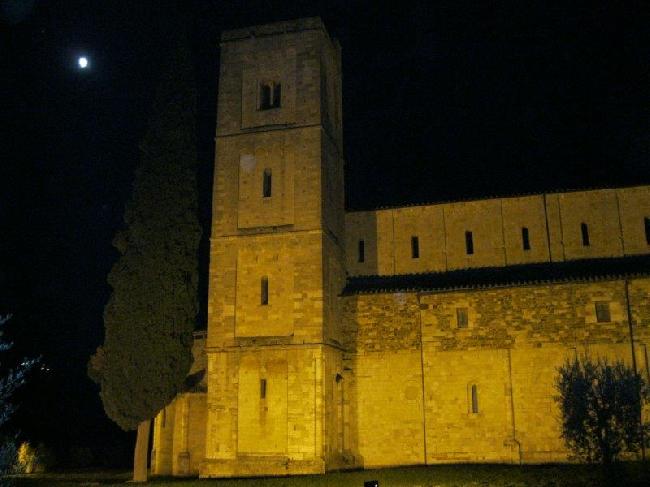 DESCRIPTION OF THE STRUCTURE

Almost nothing remains of the Chapter Hall. In the past, however, it was one of the most visited places as it was the community’s meeting place. A triple lancet window, supported by capitals and small columns, is the best artefact that still exists today. 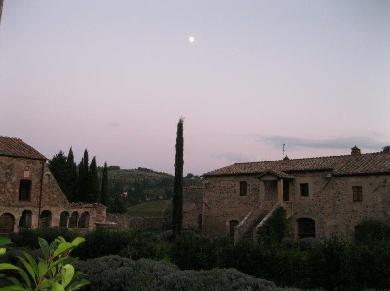 The most recent and best-preserved construction is the actual church building. Its main feature is the position of the belf tower, which is attached to the church because it is thought to be of an earlier construction.

Together with the bell tower, another noteworthy feature is the apse, solemn and majestic, crowned by three radial chapels. 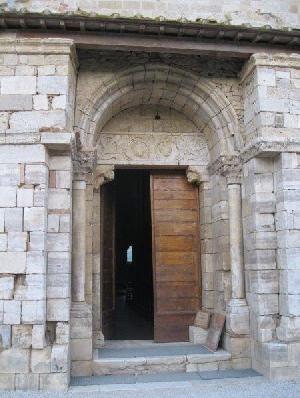 From the facade, the grand central door catches the eye as it is topped with a beautiful bas-relief architrave depicting a grapevine. ‘Y Inside, the church has a great central nave that separates two small lateral aisles by a series of four round arches leading to a great ambulatory. The side aisles are covered with cross vaults and ten spans, each decorated with a work of art. One of the most significant is surely the capital that represents “Daniel in the Lion’s Den”, work of the Master di Cabestany, atop the second column on the right from the main entrance. In an extremely restricted space, he managed to represent all the prominent episodes from the Bible story, narrated in the Book of the Prophet Daniel. This capital, which symbolizes the resurrection, was placed in this position because in the springtime it is illuminated by the sunlight. 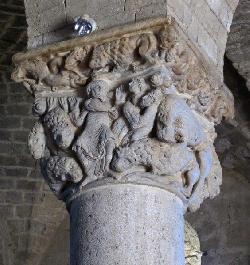 Outside the Abbey, there are two particular hollows above and off to the sides of the socalled “Catechumen” Door. Until the middle of the twentieth century, the purpose of these holes was not understood. The mystery was revealed when, during an archaeological   campaign around Castelnuovo dell’Abate, precisely in the great fireplace of the main room at the Velona Castle where they were used as andirons to hold buming wood on the fire, two big stones in black basalt were discovered. They are decorated by a stylized fiash of lightning with the edges like ivy leave (40x30cm and 2030kg) 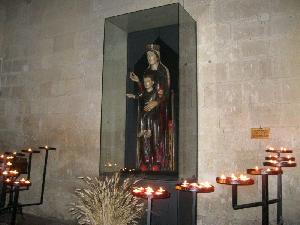 At first, they were not immediately linked to the two hollows on the side of the Abbey, however, after reading a publication dated 1888, there was no doubt: two stones, dubbed “missile cocks” were mentioned as having been positioned above the architrave of the side door.

The two stones had been removed during renovations, and they were never actually returned. They can currently be seen at the Archaeological Museum in Montalcino (schedule). 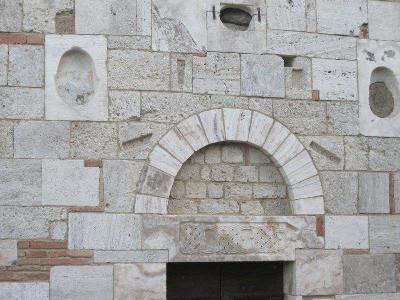 What those two big stones with their rounded grooves and a small lozenge actually represented was the subject of many theories: from medieval ammunition to units of weight from the Middle East, or the Talent, a symbol that the Etruscans used to place at the entrance to their villages to propitiate fertility. Today, however, it still remains an unsolved mystery.(source:Amici di Montalcino) 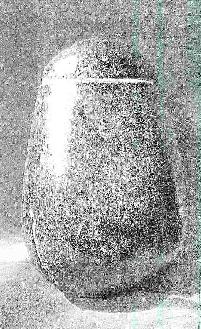 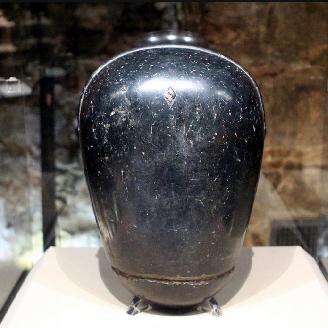 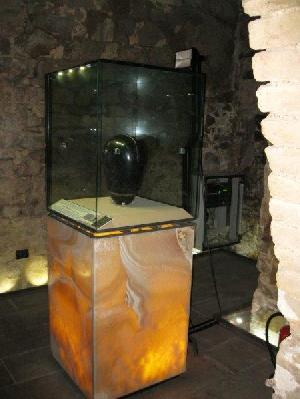 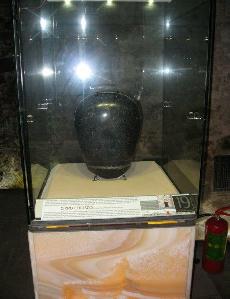 The Abbey of St. Antimo remains open throughout the day.

During the functions visits are suspended