The Noeplatonic Academy of Lorenzo the Magnificent

The Platonic Academy in Florence was a driving force of Neoplatonism during the Renaissance period.

The Platonic Academy was founded in Florence, Villa Medici at Careggi, in 1462 by Marsilio Ficino, following the orders of Cosimo de Medici. A group of philosophers, writers, and artists worked together to reopen the ancient Athenian Academy of Plato. Among the leading proponents of the Neoplatonic academy in addition to Ficino, were

After the capture of Costantinopoli in 1453, Byzantine intellectuals were enrolled as teachers at this academy. 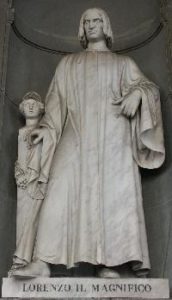 Their presence allowed the direct use of the texts of Plato, which had been translated into Latin and were almost completely unknown during the middle ages.

The renewed interest in the classics, and Plato in particular, characterized the school Neoplatonic and steered the interest to pedagogy which aimed to educate young people in the harmonious development of all human qualities, both physical and spiritual, making each individual as unique as a piece of artwork.

Love, freedom, and the search for the infinite were defined as values. Love was understood primarily as a platonic way to rise to perfection and contemplation of God.

As for religiosity, according to Cusano, the human individual being a small part of the world is a totality in which the entire Universe is reflected. Man is in fact the image of God, and as numerical units potentially define all numbers, man expresses himself in the UNIVERSE.

Love is the work of God in the World, according to Ficino, which in a circular process and part of Renaissance astrology, which suggests a correspondence between the structures of the mind and the real structures of the universe. This was also the prerequisite to the harmony of the universe which Copernico, Keplero and Galileo spoke about, stating that the universe was govemed by a harmonic order concentrically structured; a dynamic equilibrium symbolized by the circle and the sphere, believed to be the most perfect figures.

God’s place the geometric order of the Cosmos, led to Galileo’s famous statement: “the book of Nature was written in mathematical language.” One of the many ancient works rediscovered during the Renaissance was the “Corpus Hermeticum” of Hermes Trismegistus, which Cosimo de Medici had translated by Marsilio Ficino around 1460. The book was the basis for alchemy, which sought to intervene in natural forces through the study of and scientific experiments on elementary substances. The main purpose of the alchemists, who were a great impetus for modern pharmacology, was the search for the philosopher’s stone believed to be the source of three fundamental properties: immortality, omniscience (the knowledge of the past and future) and the ability to transmute base metals into gold.

A characteristic of Renaissance researchers was their versatility, which enabled them to perform several different tasks simultaneously, according to the ideal universal man described by Leonardo Da Vinci. In mathematics, we remember the particular attempt to square the circle by Cusano.

The Neo-Platonic ideal in literature, science and art is, in general, the search for harmony and perfection

Man is the master of his own destiny and this destiny was recognized by academics as the highest aspiration for human happiness.

These ideals were also developed by Botticelli, who in his masterpiece “The Birth of Venus” depicted celestial love, which was highlighted by the purity of the nude.

According to Michelangelo Buonarroti, the artist looked like God because of the attempt to incorporate his idea into matter, just as God had created beauty in the physical world.

Neoplatonic architecture was the pursuit of the model or ideal city, which tried to create harmony and balance through the works of man. This was also the concept behind the architectural design of Leon Battista Alberti.

Even in the main work of Tommaso Campanella, (a late Renaissance philosopher, who wrote The City of the Sun in his 27 years in prison in Naples for conspiracy and heresy), we can find the neo-Platonic theories for the Ideal Society.

After the death of The Magnificent in 1492, the Neo-Platonic Academy met at Villa di Bernardo Rucellai, at the Orti Orcellai in Via Rucellai. 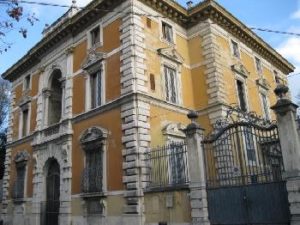 During this second generation, whose members included Niccolo Machiavelli, Jacopo da Diacceto and Luigi Alamanni, the figure of man took on a sense of responsibility in history, opposing the will and human responsibility to the destiny and the unknown of history.

The Platonic Academy was dissolved in 1523, as a result of a conspiracy against Cardinal Giulio de Medici by some of its members.