The Hot Springs of Val D’Orcia: parking areas, conceived and designed already in Roman times, where to relax body and mind

Bagno Vignoni is a small hamlet part of the municipality of San Quirico d’Orcia, in the province of Siena, less than 20 km from Montalcino.

The villiage is in the heart of Tuscany, in the Natural Park of Val d’Orcia and is one of the most famous spas in the area. These natural hot springs, which attract many people, have been used since the time of the Romans for thermal purposes, thanks to its proximity to Via Francigena, which was the main artery for the pilgrimage to Rome.

The Bagno Vignoni was also praised by Saint Caterina of Siena and by Lorenzo the Magnificent, for its waters originating from Mount Amiata, the extinct volcano fulcrum of the Val D’Orcia. Bagno Vignoni has been well known since antiquity for its springs which were declared “Sacred to the Nymphs” and were written about in Roman inscriptions. The hot springs, located in the center of the town, arise from a large pool, which was used for health reasons by Lorenzo Magnificent.

This famous “center of springs, has a rectangular shape and dates back to the sixteenth century and contains several hot and steaming thermal springs. It has a charming and relaxing atmosphere, and a famous view from which in the evening one can appreciate the steam from the baths and the colors of the sunset across the landscape. The thermal bath, which has been famous since anicent times, had many important guests, such as Caterina from Siena, Lorenzo de’ Medici, and Pope Pio Il, along with many artists who had declared the town a place of rest and relaxation.

In addition to visting the thermal springs at Bagno Vignoni, we recommed checking out the Loggia overlooking the old baths and the Castle. When visiting the Loggia you can observe the Cassero — the fortified castle, or main tower, which in the eleventh century was owned by the Abbey of Sant’Antimo.

From Bagno Vignoni, you can easily visit the nearby towns of Pienza, Montalcino and in general, the entire Val d’Orcia area along with the Park of Monte Amiata, which has beautiful walking paths and offers nature tours.

Not far from Bagno Vignoni, there is another spa, Bagni di San Filippo, which was also well known during Roman times and has a great scenic landscape, the Natural Park of Monte Amiata. 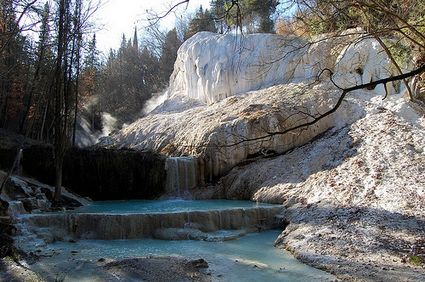 Its Roman origin was confirmed by the discovery of a series of tombs and some coins which dated back to the time of Costantine, Domitian and Trajan. The first written evidence of the Baths of San Filippo, can be found in a document dating back to the Abbey of San Salvatore in 859 AD. Subsequent documents record thermal activity and the secession of several lordships who were in control over the years.

Many of these important stories involve the noble Florentine Family, De’ Medici.

The thermal baths were renovated in 1566 by Cosimo I de’ Medici. 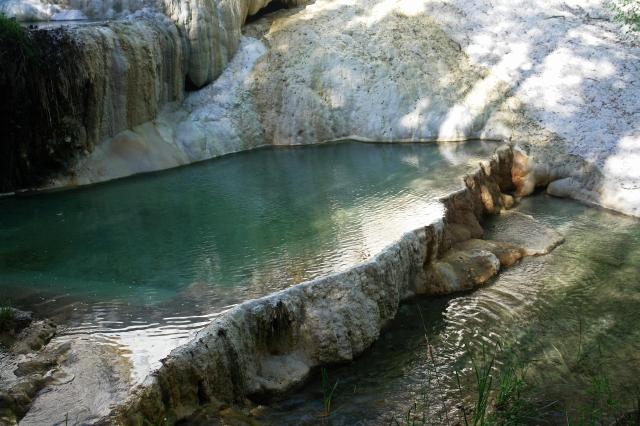 Returned to their formal glory, the thermal baths became a resort and place of rest and relaxation for famous people, including Lorenzo the Magnificent, who suffered from gout. And Pope Pius ll. Citizens of the small hamlet often spent time there as well.

The importance of thermal hot springs was well understood, both from a social point of view as well as a healing one. This led to testing the hot springs using chemical analysis, which revealed important therapeutic properties: including sulphurous waters, sulphate, calcium and magnesium at a temperature of 480 C. Thus these waters not only have anti-inflammatory properties, but are also analgesic, muscle relaxants, thinners and anti-microbial.

Rich in calcium carbonate, the thermal springs also became famous from an artisitic point of view. The limestone concretions that form deposits around the banks, the branches that submerge or the fallen leaves, all create real works of art.

The cementing nature of water was used by Leonardo De Vegni in the mid-eighteenth century. De Vegni was a writer, architect and amateur nautural scientist, who invented technique for making what was known as “the plastic of Tartars” with which he created several artistic pieces.

For its production, in 1766, De Vegni built a special Tartars factory, right in the town of Bagni di San Filippo, which was much appreciated by Granduca Pietro Leopoldo. Even Emanuele Repetti, in his dictionary, describes the method devised by De Vegni: The engineer Leonardo De Vegni created the industrious method of filling the concave shapes that appear with the fouling of the thermal waters of S. Filippo […l”. The fortune of the “plastic of Tartars” went well beyond the lifetime of Leonardo De Vegni, and therefore was considered to be a real and true industry. To describe in detail how it was made is complex, but in general they would use special devices in order to concentrate and then precipitate calcium carbonate in a slow and continuous manner from the thermal waters. The result could be modified by changing the angle of the water jet and colored using additional substances.

Today San Filippo Terme, with its modern facilites, is an ideal place for a relaxing holiday and offers thanks to the healing properties of the waters, a valuable remedy for various ailments. The spa provides various treatments such as thermal baths, mud baths, inhalation and aerosol treatments. The thermal pool with a waterfall is one of the main attractions, with water rich in sulfur, calcium and magnesium, at a temperature of no more than 400C. In addition to the Wellness Center, there is an impressive small source of water called “Acqua Passante”, water known for its rich mineral content. The locals are fond of this water and drink it during meals. The San Filippo Termal baths are located within a large park with the typical vegetation found in Val D’Orcia. 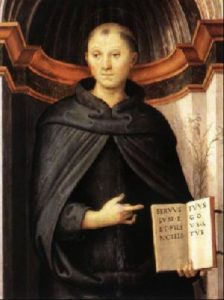 The origin of the name, San Filippo Terme, comes from the life of Filippo Benizi, a noble Florentine born 15 August 1233 in the Oltrarno district of Florence to Giacomo Benizi and Albraverde Frescobaldi.

His parents wanted him to become a doctor so he was entrusted to a good guardian and sent to study in Paris. He later graduated from the University of Padova in 1253. After practicing medicine for some time Filippo realized that he wasn’t satisfied with his life and decided to found the order of the Servites as a lay brother along with the Seven Founders (founded in 1233) in Florence, in what was then an area of open countryside and where today stands the Basilica of S.S. Annunziata.

They formed a small community which later withdrew to Montesenario, 18 Km from Florence. There he built a church and began to accept other people that wanted a community life of prayer and penance.

They were canonized in 1888 and their celebration is on February 17. 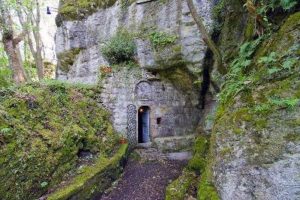 was elected Prior General of the order. Mile service in 1267 he collaborated with Giuliana Falconieri in the fondation of the Oblate Servite, called Mantellate. Only two years after his nomination, it was possible to raise Filippo Benizi to the papal throne. To escape his written fate, according to legend, he took refuge in the forest of Bangi di San Filippo, hence its name.

To be percise, he retired to a cave dug into the travertine from which water miraculously emerged. The cave was then tranformed into a small hermitage which is still in tact in the San Filippo Bagni, in the municipality of Castiglione d’Orcia. He died in Todi on August 22, 1285, and despite the immediate veneration, Clemente X didn’t ratify the cult until 1671.

The thermal baths of San Casciano dei Bagni, located near Bagno Vignoni is equally famous for the healing properties of its thermal waters, and an interesting destination for those who want to relax while enjoying culture and focusing on well-being. 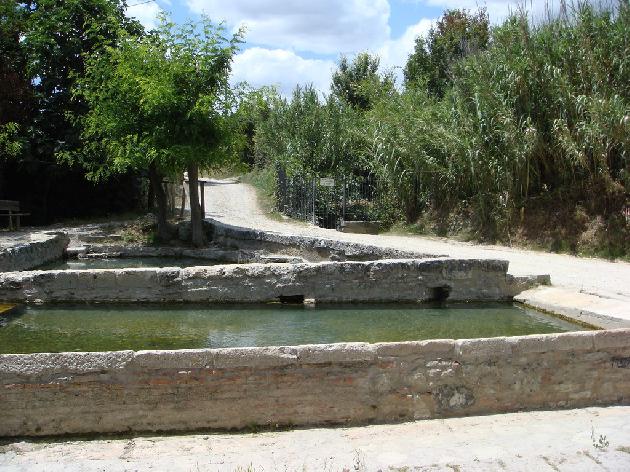 The thermal baths have always been the main attraction of this small town, dating back to the Etruscan period. Thanks to its convenient location, close to Via Cassia, the main pilgrim route to Rome, many important people from the Roman Imperial, such as Augustus, spent time at the San Casciano Bagni.

Despite the fact that Via Cassia lost its importance during the Byzatine-Lombard wars, San Casciano Bagni did not lose its importance due to its close proximity to the new “highway” to Rome: Via Francigena. Many important people came from all over Europe, as well as Italian Nobles who economically and architecturally enriched the city of San Casciano dei Bagni. After the Grand Duke of Tuscany, Pietro Leopoldo visited the Spa, he was so impressed by its beauty he donated 21,000 Lire to finance the road work to connect it to Via Romana.

Today the Termal Baths of San Casciano dei Bagni with 42 springs and the Fonteverde Spa offer a wide range of high quality services and treatments.

Last, but not least, is the Terme di Petriolo, which is a bit further away from Siena, but not too far. Immersed in beautiful scenery, the termal baths are located in the Natural Reserve of Basso Merse between the towns of Civitella Paganico and Monticiano, which are two of the five municipalities located in the Val di Merse. The Val di Merse is a territory full of streams and springs and is considered an ideal place to experience nature in its fullest. 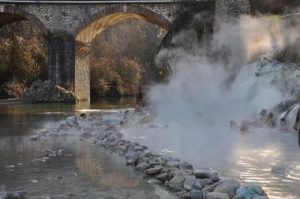 Due to the high concentration  of hydrogen sulfide present these thermal baths are particularly sutiable for those suffering from respiratory problems. And despite its small size, it was also a popular destination for important people in the past, such as Pope Pius ll. 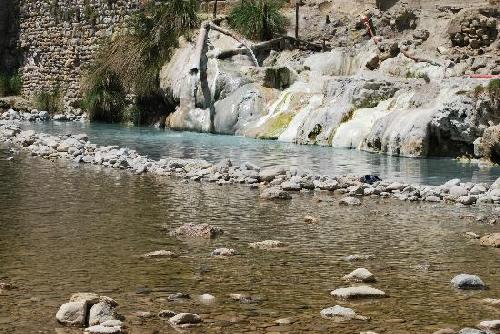 Dating back to 1404 the town of Petriolo was orgininally a defense fortress for the Spa and its patrons, and even today it is a beautiful example of a fortified thermal spa.

Now a little interesting story, or rather a legend passed down for thousands of years. Not far from the Petriolo Thermal bath is Ponte della Pia, a humpback bridge built during the Roman times and then rebuilt during the middle ages. 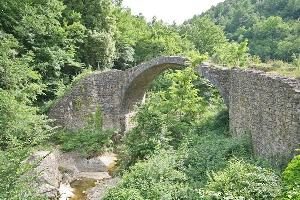 Legend has it that Pia dé Tolomei, passes back and forth over the bridge. Pia, the unhappy wife of Nello d’lnghiramo, was travelling to the Castello della Pietra in Maremma after having been exiled by her husband who was in love with another woman, Margherita Aldobrandeschi. Pia was killed by her husband in the Castle in 1297 and the legend says that the ghost of Pia surrounded by a faint glow appears on the bridge during the nights of the new moon.

Dante Alighieri in Canto V of Purgatory in the Divine Comedy recalls the event:

«”Ah, when thou hast returned unto the world,

And rested thee from thy long journeying”,

After the second followed the third spirit,

“Do thou remember me who am the Pia;

Siena made me, unmade me Maremma:

He knoweth it, who had encircled first,

Espousing me, my finger with his gem”.

In this passage, Pia de Tolome asks Dante to pray for her return to Earth and to feel rested after the long journey. There was also reference made to her death in the hands of her husband, not with recrimination but rather with detachment towards her past life on earth, demonstrating kindness, pride, compassion for the soul of a great woman that Dante wanted to hand down to posterity.