Piccolomini, the sister of Pope Pius Il, born Enea Silvio Piccolomini, founder of Pienza. Following the project of Bernardo Rossellino, the favorite architect of the Pope, the work began in 1469. The project was to build a three floor harmonious and elegant palace of Renaissance architecture. The ground floor is characterized by the embossing technique, while the upper floors are characterized by large mullioned windows divided with stringcourse.

Looking at it from a distance the style clearly recalls Florence’s Palazzo Rucellai or Palazzo Piccolomini in Pienza. The latter was also designed by Rossellino.

A very characteristic feature of the palace is the quadrangular courtyard surrounded by columns whose capitals were sculpted by Marrina. The whole architectural complex of Papesse Palace of Siena was part of the humanistic project of Pope Pius Il and his sister Catherine, ancestors of Archbishop Ascanio Piccolomini, who each sought out to realize the humanistic project of the Ideal City by maintaining and using perfect proportions. 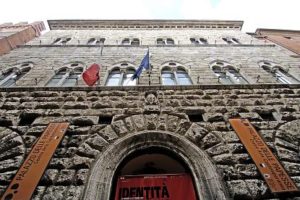 At the end of the seventeenth century the Piccolomini family died out and the building was rented to the Tolomei college until the beginning of the nineteenth century. In 1858 it became home to the State Archives.

After successive phases of restoration and the extension of the surface space, it was opened to the public in 1998 and is currently a Center for Contemporary Art.

This structure has an historical importance because science connected it with the events in the life of Galileo Galilei. In 1633, after being convicted by the Inquisition, Galileo was forced under house arrest at the residence of the Grand Duke of Tuscany, Francesco Niccolini, at Trinitå dei Monti in Rome. He was able to leave the papal city in July of the same year, thanks to the Archbishop Ascanio Piccolomini, who hosted him in Siena at the Papesse Palace. During his stay in Siena in 1633, the Archbishop allowed Galileo to meet and correspond with people and even take part in, despite the condemnation, scientific debates. In this period Galileo produced one of his most renowned scientific debates, “Discourses and Mathematical Demonstrations Relating to Two New Sciences,” published in 1638, which later helped Newton to formulate his law of universal gravitation. It did not last long because during his stay in Siena an anonymous letter was sent to the Holy Inquisition denouncing the actions of the Archbishop and Galileo. The Holy Office arranged, under request of the Galileo, to confine him to the isolated Villa Il Gioiello, in Arcetri (Florence). In the order of confinement in Florence, Galileo was for a time not to call or receive any visitors except for family members, at the will of His Holiness. The only concession was that he was able to correspond with friends and admirers and with the proximity of his beloved daughters, especially Virginia, known as sister Maria Celeste, who lived in a nearby convent of San Matteo in Arcetri, he was able to remain in contact.