Beatesca is the result of a project that came to life in 1991, when Furio Fabbri and Benedetta Pasini, newly weds with a great passion for horses and country life, decided to buy a country home in Montalcino. The small estate, in the “Fornello” area, includes two land plats, “Colombaio Giannelli” and “Le Piagge” with 2.5 hectares of land on the slopes of the Ilcinese hills.  This is a land which has always been dedicated to the cultivation of the vine.  In fact, they discovered a sixty-year old vineyard, as well as 300 olive trees, some mulberry trees and fruit trees. The first years, while working with great curiosity, dedication and passion, were dedicated to rebuilding and renewing the small vineyard, which had been there for years but had risked disappearing.  They carried out this process carefully while maintaining the balance and integrity of the land. Meanwhile Furio and Benedetta, spending more and more time there, fell deeply in love with Montalcino and its traditions so they decided that they would like to continue the cultivation of the ancient native grape, the Sangiovese Grosso and produce its symbolic wine, Brunello. The vineyard, the smallest of its kind, is situated on the North-East side of the Montalcino Continent. Due to the old age of the vines and faces the town of Pienza it was replanted in 2001. By virtue of the combination of the vineyard laying requirements, latitude and exposure, the vines get a lot of sun and are well lit, which enhances and brings out the most noble and elegant aromas of the Sangiovese grapes. It is important to remember that, following recent climatic changes, which have led to various hot and dry harvests, our production has benefited from this positive microclimatic situation. The soils were thoroughly studied by Professor Mario Pasini of the Department of Geology and Paleontology at the University of Siena, who also happens to be Benedetta’s father.  These soils have a loam-clay texture and are richly diatomaceous with the vines. They are arranged on straight terracing by archaic dry-stone walls, and are grown using spurred cordon for a high plant density. Unit production is about one kg per plant.

“Such a particular project deserved an equally distinctive brand – says the elegant Benedetta Pasini Fabbri – in fact, Beatesca derives from the fusion of our daughters’ names and in memory of Dante.  But not only…. Beatrice, a name of Latin origin, means ‘the one who gives bliss’, while Francesca is a name that, although widely diffused in Italy since the end of the fourteenth century, is of German origin (Frankish) and represents a strong sense of belonging, that of the Franks to the German people. Beatesca is therefore an act of love towards our daughters, but also the synthesis of what we believe wine should be: an act of love linked to the sense of belonging and upholding one’s own traditions and to the importance of this ancient place where this red poetry was born and endlessly offers beatitude.” But, in addition to the generosity of the territory and the passion of the owners, there are also two other key important players, oenologist Roberto Cipresso and agronomist Oriano Scheggi.  Together they set up a virtuous viticulture with eco-sustainability wich as almost no impact on the environment.  The agronomic management can be defined as an integrated management, making use, depending on the various circumstances, of interventions and measures that are inspired by different working agricultural philosophies depending on the problems to be faced and the choices needed to be made. The main goal is to ensure the maximum possible respect for the equilibrium of the agroecosystem, as well as obtaining the best results in production over the years.  Weed control is carried out through targeted soil processing and weeding is not done. The mechanical interventions on the land and the fertilizations are calibrated in order to safeguard as much as possible the correct structural state of the soil, preserving its fertility and increasing its organic content. These actions, on the land, vegetation and the fruit – pruning, sprout selection, pruning, thinning – are also defined by the single harvests considering both the time period and the intensity of the intervention in order to guarantee the proper development of the plant, to ensure a balance between the vegetation production and the different constituents of the grape. At the winery, the winemaking style does not involve any type of forcing and is in line with the traditional Brunello protocols: fermentation takes place in steel and wooden conical vats, the aging takes place in five hectoliter French oak tonnaeux and bottling is not preceded by some filtration, so as to keep the structure and fruits authentic expressions intact as much as possible. Beatesca’s reds have not only a solid vertical system guaranteed with good acidity but are also reach in mineral salts, and have a beautiful soft palatal, clean with an expressive persuasion. Starting with the Rosso di Montalcino, a DOC wine established in 1984, which finally in recent years can count on a newfound awareness among the producers of the Turin area. Today is more and more sought after for its exceptional quality/price ratio. Beatesca’s Rosso di Montalcino is refined for a year in Tonneaux, six months for the first passage and six months for the second passage and then an additional year in glass. It is an absolute excellence, to the eye the color is transparent garnet, to the nose it offers intense aromas but at the same time articulated and deep connote of dark cherries, undergrowth, damp earth, china and rhubarb, while the palate experiences freshness and depth, with a very good acidity and flavorful tannin. The solar and balsamic Brunello – the first thousandth released onto the market was in 2005- is aged for two years in Tonneux (one year for the first passage and another 12 months for the second passage) and two years in the bottle. Elegantly austere, it promises great longevity with a common component among the different vintages that encourages and generates a strong territorial identity. A ruby garnet color, compact, deep, dense and concentrated, the nose expresses a beautiful ripeness with hints of sweet spices and small berries, cherries blackberry, plum and lastly tobacco and graphite. On the palate it is mentholated, preserving the taste of ripe fruit, licorice, with herbaceous traces, tannins from dense texture, and a full body for a persistent and juicy finish. 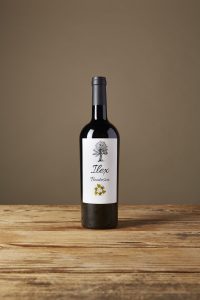 The production also includes a basic wine, the IGT “Ilex” which follows the tradition of being a pure Sangiovese, but in the ready to drink version, coming out only a year and half after the harvest.  There is also the delicate grappa from the distillation of Brunello pomace done by the expert Vittorio Capovilla from Vicenza. “I graduated with a degree in agriculture from the Agricultural Institute of Cascine because as a child I decided that I would either become a farmer or a priest,” recalls Florentine Furio Fabbri, as things turned out I have had the great satisfaction of running a company in the environmental sector with offices in Italy, Spain and France.  Still regardless I think I will finish my career as a winemaker and farmer in Montalcino, a terroir that reminds me of parts of France.” Benedetta Pasini is also Florentine, but she also has had such a long acquaintance with these lands, having lived and studied in Siena, in addition to the fact that for decades her parents had a house in San Giovanni d’Asso, a place to be considered partly Sienese.  When we got married we did something different from other couples who were all buying houses in Florence, we decided to buy this little farm house in the heart of the countryside. In terms of wine, we are quite traditionalists and even if in the first part of the past twenty years this area of Montalcino was penalized by intense rainfall, since 2009 the situation has turned around in our favor.  We have a very particular terroir with soils rich in acidity and substances, which are fundamental for the vineyard and for the wines with long aging.  This gives the wine notes of gunpowder due to the mineral aroma of the stones”. On our website Beatesca (www.beatesca.com) it is possible to find all this information and more. Our website…. Offers all this information and more. Not only is it an interesting e-commerce, but also and above all for all the great possibilities, through stories, images and flavors, an opportunity to meet the territory, its beauty and its characteristics. It is also an opportunity to discover and deepen an idea of the world linked to good food, music, art and nature, as well as of course wine.  A beautiful journey through the “dolce vita Toscana” – universally recognized as the cradle of the Renaissance – intense like the ability to enjoy moments of intense aromas, ancient flavors and enchanting landscapes, immersed in the colors that change from season to season.