The history of Brunello di Montalcino

Brunello di Montalcino is a DOCG red wine produced in south eastern Tuscany only from grapes produced within the administrative territory of the Municipality of Montalcino in the Province of Siena. The production area extends over 243.62 km2 and is bordered by the Ombrone, Asso and Orcia Rivers. 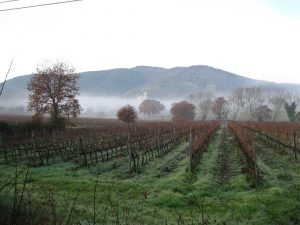 The Montalcino hill has numerous soil-type- environments as it was formed in different geological eras that can be traces back to sandstone and a combination of limestone, alberese and marl as well as sandy to sometimes clayey soil.

The Climate is Mediterranean tending to dry with some continental elements due to its position between the sea and the central Apennines. Rainfall is concentrated in spring and fall months.

The mid-hill range is not affected by fog, frost or late hoar frost. The frequently present wind guarantees optimal conditions for plant health. During the vegetative phase, temperatures are mild, and the days are mostly serene: conditions that guarantee excellent grape maturation.

The combination of natural and human factors defines the characteristics of Brunello wine. Winemaking techniques used today are the result of numerous observation and experimentations over the years. Cultivation and pruning take soil and climate demands into account including the relative scarce water supply, which requires periodic efforts to keep the ground irrigated. The perfect state grape maturation and its integrity on a phytosanitary level are the result of soil and climate factors in addition to the management of those factors during the growing phase.

The production of fine wines has been Montalcino’s vocation for centuries even during the famous siege of Montalcino in 1553. While defending the twon walls, Blaise de Montluc “made his face ruby red in colour with robust wine” to mask his suffering.

Until the second half of the 19th century, the most well-known and valued wine in the area was Moscatello, a sweet white wine, awarded at the Universal Exposition of Paris in 1967. With the arrival of the phylloxera and oidium that were destroying the

vines at that time and following in his grandfather’s footsteps, Ferruccio Biondi Santi, Clemente Santi’s grandson, started to study the potentiality of the Sangiovese variety clone locally knows as Brunello because of the particularly dark colour of the grapes.

The result of his experimentation and research produced the variety used to this day to make Brunello di Montalcino, Sangiovese Grosso.

In spite of the numerous awards and acknowledgements over the years, Brunello was only known and valued in the surrounding area for many years, also because of its elevated price.

Vicissitudes at the beginning of the 20th century set in motion a decline in winemaking: so much so that very few producers continued their production between the two wars.

Brunello di Montalcino is visually limpid in ruby colour tending to gamet with ageing. It has a typical and intense aroma. It is dry, warm, a little tannic, robust, well-orchestrated and persistent on the palate. Because of its qualities, Brunello di Montalcino can endure ageing, improving over the time.

The wine’s elegance and harmonious body allow for pairings with dishes that are very structured including fur and feather game, red meats, even mushrooms and truffle. Given its properties, it is also an enjoyable meditation wine.

Brunello must be served in broad bowl wine glasses in order to bring out the complex and harmonious aromas. Serving temperature between 18° and 20°C.

of any dimension and at least four months in the bottle and cannot be released before January 1 after the fifth year after the harvest.

The vinification, storing, wood-ageing, bottling and bottle-ageing steps must be carried out in the area of production. Brunello di Montalcino must be released to market in dark Bordeaux glass bottles and closed with a single piece cork stopper: amalgamated stoppers or any other type of stopper are prohibited. Acohol content must be a minimum of 12.5% 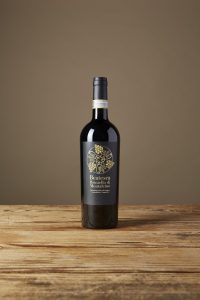 Under the DOCG REGULATIONS, “Brunello di Montalcino” wine must undergo testing of its chemical, physical and organoleptic properties by a Tasting Commission, as per the current regulations. Once it has passed, the State Mint and Polygraphic Institute issues progressively numbered neck seals, which must be placed on every bottle before being released on the market, for traceability.